If digital badging wasn’t motivating enough already, enter wearable badges! Seriously, check out the smiles and the thumbs up of the students sporting their badging swag to the left. For the past month, each time students earn a digital badge, they also earn the corresponding button to pin on either their lanyard or on their backpack.

Today a student came up to me after school and asked if she had earned the Accomplished Presenter badge and if I had the button ready for her yet. She had just submitted evidence for it 2 hours before. I laughed good naturedly and told her that the buttons are being created in the back room as we speak and for her to just be patient another day or so, and she will earn the badge to add to her collection. (I created a public Badgelist account of some of the badges I award here. I use the private accounts for students, but feel free to build on any of my badging ideas.)

There is a debate about badges being extrinsic motivation, as students are merely trying  to earn something instead of the reward of learning for learnings sake. I thought a long time about this argument and believe that badges are deeper than extrinsic motivation.  I liken earning badges to when I was a young tennis competitor and earned trophies when I placed in tennis tournaments. The trophy was never the reason I entered the tournament. It would have been a lot cheaper and easier just to buy a trophy at the store if that was the case. The trophy represented my hard work and the number of hours I spent practicing to refine my skill. Badging is the same. Badging has harnessed the power of encouraging students to earn a concrete skill which they can proudly display.

How do I know it’s more than just wearable bling? I’m still gathering evidence, but a few weeks ago a student wanted to create his own button of an object that he designed in code and I allowed him to create it. However, even though he designed it, he doesn’t wear it on his lanyard. When I asked him about it, he told me that he wants only his accomplishments to wear on his lanyard, and though he is very pleased with the button he designed, he decided that his school lanyard is for displaying only badges earned.

I allow students who have the Advanced Typist badge forgo keyboard covers when they take their biweekly typing tests. I was worried about my 7th grade students letting a student from another class “borrow” their button.The fact that a digital badge is attached to the button keeps this from happening. If I have a question about the authenticity of the button, I can ask the student to show me their digital badge (or I can check it on my own).

A digital badge has evidence attached.

The button is simply a wearable signal that they have earned the digital badge. The digital badge carries the evidence that the requirements of the badge have been met. I could not do this buttoning system without the badging system, as the digital system is based on criteria and evidence. In my classroom, I use Badgelist as my digital badging system. The picture to the left shows a badge that Diego earned and if it was the actual website (as opposed to a still jpg image), you would be able to click on the evidence log to see the corresponding evidence which he submitted to earn the Novice Coding II badge. If you have questions about getting started with digital badging see my prior posts here. You may also check out a sample classroom of a lot of the badges I offer my grade 6 and 7 students at my Public TechEd Group.

I asked the student who had earned the most badges today if she wished that I did buttoning last year. (Kailene has earned 14 badges in both 6th and 7th grades). She told me that while the button is nice to wear and show, She is most proud of the actual badge as it has the evidence attached.

After researching extensively, I decided on a heavy duty Tecre 1.25″ button maker and circle cutter. A smaller button maker would be hard to see detail, but larger could not be worn on lanyards. The button size is perfect! I taught myself how to use the equipment by reading the easy to follow directions that came with the packaging.Then I taught a few of my students how to make the buttons, and they create them based on the badge images which I have on the badging account. Students enjoy making the buttons, they feel it’s like making a craft project. I often get “yes!” and “weee” when I ask these students to make some buttons. 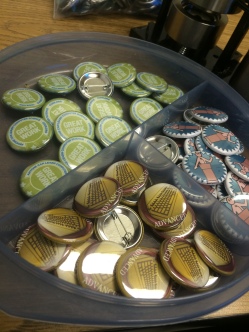